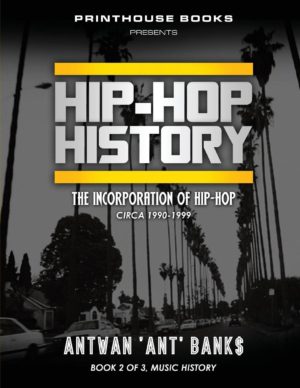 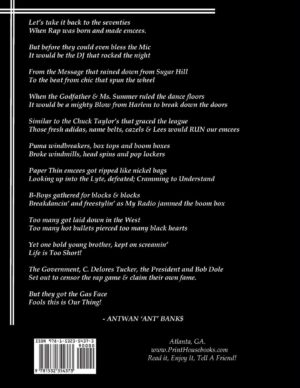 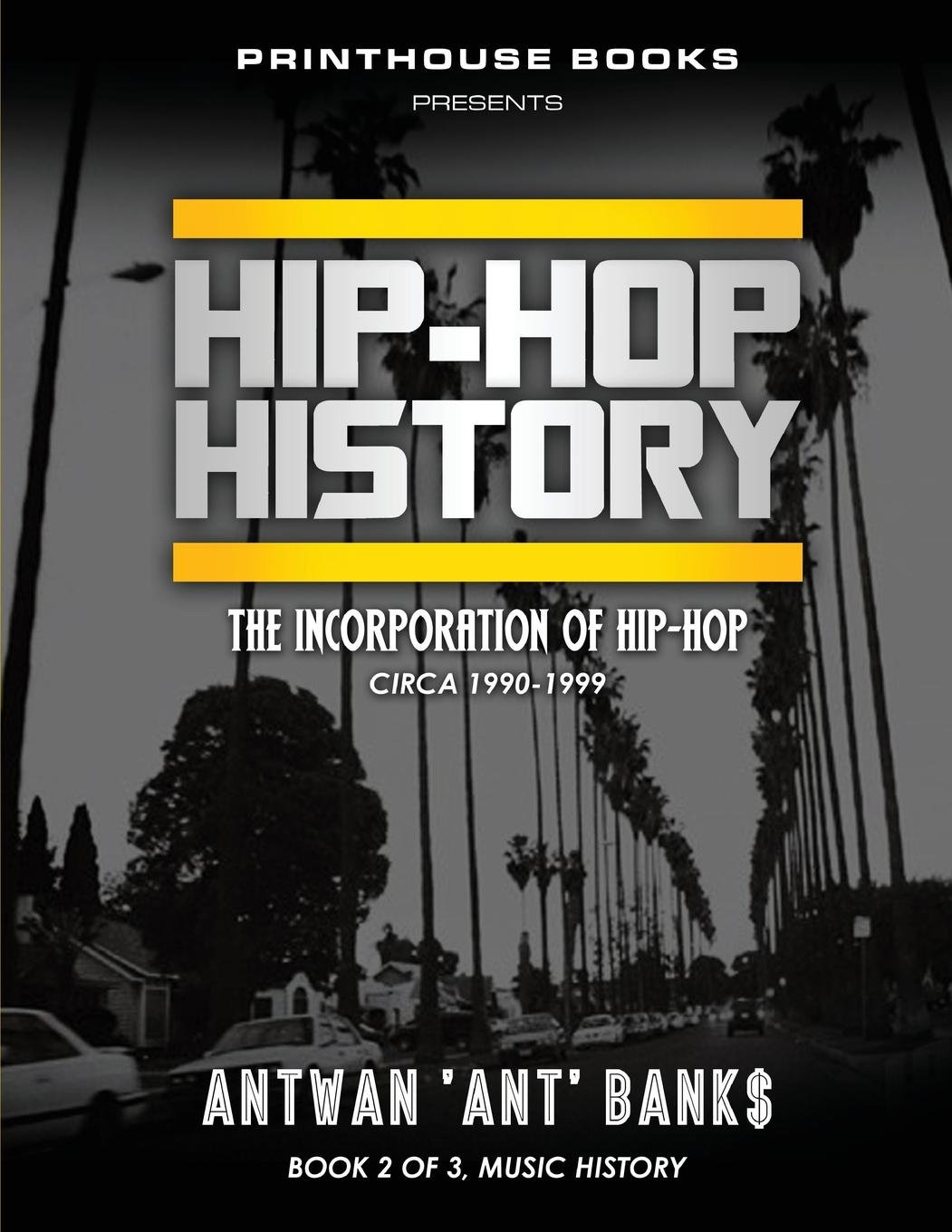 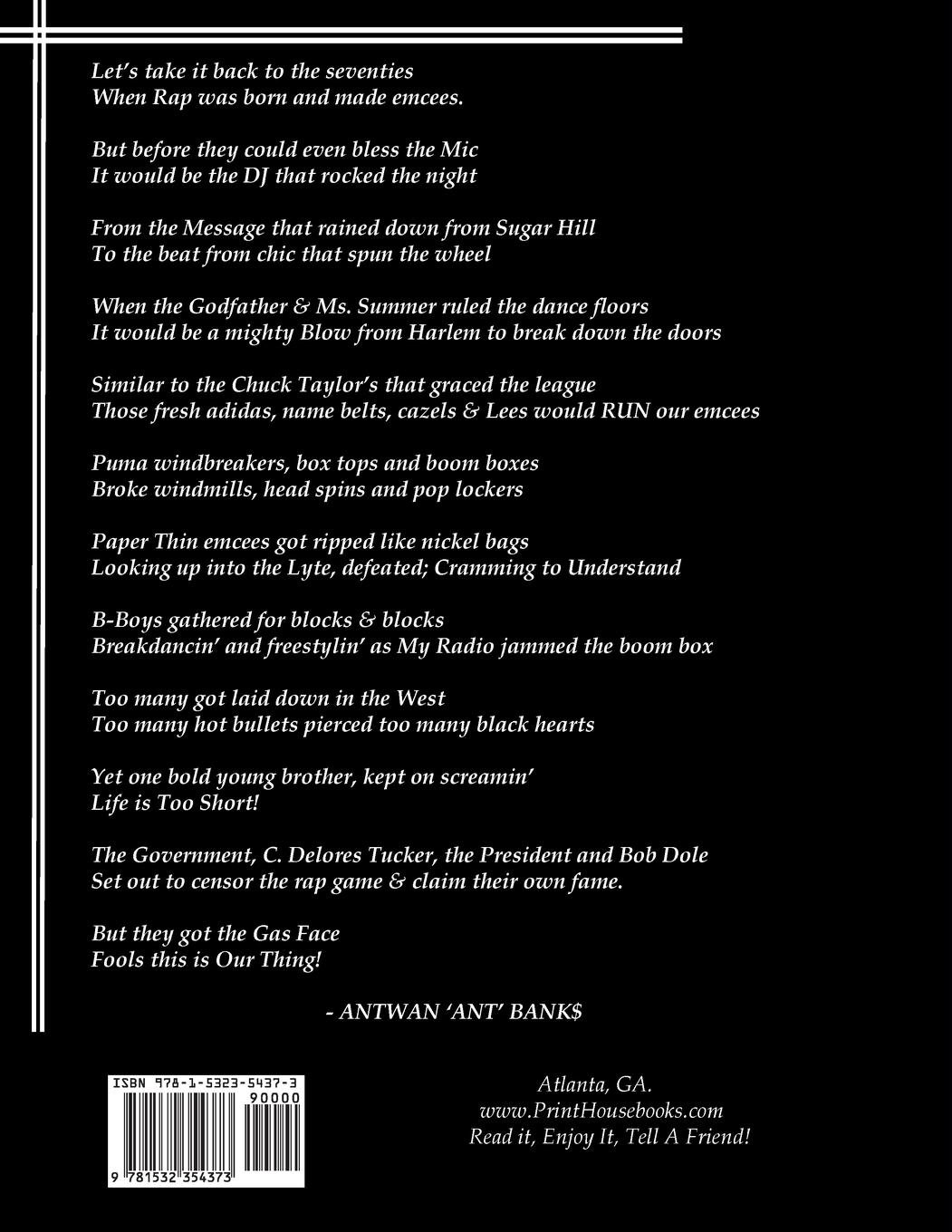 Let’s take it back to the seventies

When Rap was born and made emcees.

But before they could even bless the Mic

It would be the DJ that rocked the night

From the Message that rained down from Sugar Hill

To the beat from chic that spun the wheel

When the Godfather & Ms. Summer ruled the dance floors

Similar to the Chuck Taylor’s that graced the league

Let’s take it back to the seventies

When Rap was born and made emcees.

But before they could even bless the Mic

It would be the DJ that rocked the night

From the Message that rained down from Sugar Hill

To the beat from chic that spun the wheel

When the Godfather & Ms. Summer ruled the dance floors

Similar to the Chuck Taylor’s that graced the league

Looking up into the Lyte, defeated; Cramming to Understand

Breakdancin’ and freestylin’ as My Radio jammed the boom box

Too many got laid down in the West

Too many hot bullets pierced too many black hearts

Yet one bold young brother, kept on screamin’

Life is Too Short!

The Government, C. Delores Tucker, the President and Bob Dole

Set out to censor the rap game & claim their own fame.

But they got the Gas Face

Fools this is Our Thing!

Bestselling Author; ANTWAN 'ANT' BANK$, a U.S Army Veteran has a prolific background in business development to include the night club industry, insurance/finance and publishing industry where he's been very successful. His strong entrepreneur spirit all started as a young boy when his Grandmother enrolled him in a summer youth program at the local community center. It was there that a young woman by the name of Mrs. Martin exposed him to the process of taking an idea from his head and making it a reality.

He states that she gave the entire summer class a project to create a tangible good to resale without investing any money for the product. They had to find everyday things from home to create this item then sell it for a profit but it had to be something that they created. At age 9, Antwan came up with the ingenious idea of making flowers in a jar. He took an empty pickle jar from the kitchen and washed off the label. Afterwards he gathered two candles from his Grandmothers cabinet and took a few fake roses from a plastic flower arrangement he found in her barn. Antwan then sat at the kitchen table, placed the jar lid upside down on the table then took a lighter and melted a small mound of wax in the center of the lid. He then snipped the plastic stems of the roses in different lengths, stuck them in the mound of wax, placed the jar over them and gently screwed it to the lid. To finish the project he wrapped some blue cloth around the lid then tied it to the jar with a white ribbon. Antwan made three of those flower jars that evening and went on to sell them and several more at the community center. From that point on the drive to create businesses, grow them and earn money became a life-long passion.